Being a Morning Person Might Just Be in Your Genes 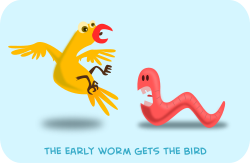 It's long been said that the early bird catches the worm, however I can't be sure that it's true. See, the chirping of the birds is usually a signal to me that it's long past time for bed. As such, I don't stay awake long enough to find out if they actually catch any worms.

I'm just not a morning person. All my life, I've struggled to wake up in the mornings and no matter how hard I try, I find it next to impossible to get to sleep before 3:00 am. During college, I deliberately planned my courses so that I wouldn't have any early morning classes. It worked so well that I carried the practice over into my professional life. Still, there have been times that I've been forced to work jobs that had an early start time. I've attempted to re-set my internal clock and have tried all sorts of tricks to make being productive in the morning easier, but it's just no use.

I have friends who wake up early and ready to go. By 10:00 am, they've already well into their day, while I'm still waking up. Around 8:00 pm, I'm still energized and working hard, while they are winding down and thinking about going to bed. It made me wonder what causes some people to be early birds and others to be night owls. Is it a learned behavior that could possibly be un-learned, or is it simply part of our genetic makeup, like having blue eyes or brown hair?

Finally, there seems to be an answer. According to a report at TheDaily, a team of researchers at Beth Israel Deaconess Medical Center in Boston have determined that difference may very well have a genetic component. They have identified a particular genotype that indicates whether you wake up early or sleep in. What's even more intriguing is that this genotype also predicts what time of day you're most likely to die – providing that you don't die in an car accident or other mishap.

The gene they found is one that we all have and it's has a direct effect on our circadian rhythm. Of course, it's important to note that “early birds” and “night owls” can do things to adjust their body's natural cycles – like when they have to work nights or swing shifts. However, when left to go to sleep when they feel tired and waken naturally, the individual's internal clock takes over.

It's a little confusing for those of us who aren't geneticists, but in general, we have a 36% chance of being an early riser, a 16% chance of sleeping in and a 48% chance of falling somewhere in between.

As for being able to predict the time someone will die, the research shows that people with the A-A or A-G genotype are more likely to die around 11:00 am, while those with the G-G genotype typically die around 6:00pm.

For me, this new information makes a lot of sense. Both of my parents were night owls. My father worked the night shift all of his life and my mother also preferred to work in the evenings. As for my friend, both of her parents wake up early as well. I guess it just goes to show that even the little things like when you wake up can be explained by genetics.

Are you an early bird or a night owl? Do you think that your predisposition is hereditary? Why or why not? Please share your thoughts in the comments.

Become a member to take advantage of more features, like commenting and voting.